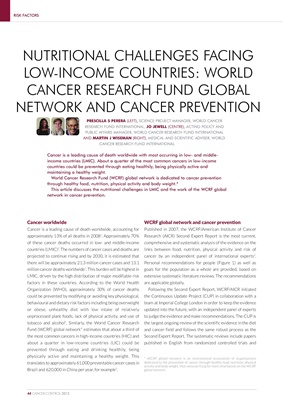 income countries (LMIC). About a quarter of the most common cancers in low-income

countries could be prevented through eating healthily, being physically active and

Cancer is a leading cause of death worldwide, accounting for Published in 2007, the WCRF/American Institute of Cancer

approximately 13% of all deaths in 2008 . Approximately 70% Research (AICR) Second Expert Report is the most current,

countries (LMIC) . The numbers of cancer cases and deaths are links between food, nutrition, physical activity and risk of

projected to continue rising and by 2030, it is estimated that cancer by an independent panel of international experts4.

there will be approximately 21.3 million cancer cases and 13.1 Personal recommendations for people (Figure 1) as well as

million cancer deaths worldwide1. This burden will be highest in goals for the population as a whole are provided, based on

factors in these countries. According to the World Health are applicable globally.

could be prevented by modifying or avoiding key physiological, the Continuous Update Project (CUP) in collaboration with a

or obese, unhealthy diet with low intake of relatively updated into the future, with an independent panel of experts

unprocessed plant foods, lack of physical activity, and use of to judge the evidence and make recommendations. The CUP is

tobacco and alcohol2. Similarly, the World Cancer Research the largest ongoing review of the scientific evidence in the diet

the most common cancers in high-income countries (HIC) and Second Expert Report. The systematic reviews include papers

prevented through eating and drinking healthily, being

physically active and maintaining a healthy weight. This * WCRF global network is an international association of organisations

translates to approximately 61,000 preventable cancer cases in dedicated to the prevention of cancer through healthy food, nutrition, physical

activity and body weight. Visit www.wcrf.org for more information on the WCRF