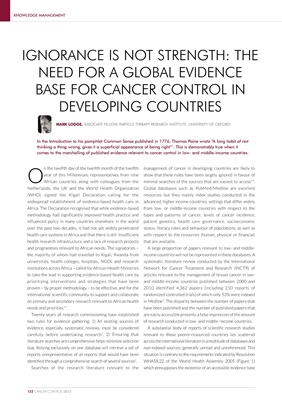 IGNORANCE IS NOT STRENGTH: THE

NEED FOR A GLOBAL EVIDENCE

BASE FOR CANCER CONTROL IN

In the Introduction to his pamphlet Common Sense published in 1776, Thomas Paine wrote “A long habit of not

thinking a thing wrong, gives it a superficial appearance of being right”1. This is demonstrably true when it

comes to the marshalling of published evidence relevant to cancer control in low- and middle-income countries.

O year of this Millennium, representatives from nine

African countries along with colleagues from the

Netherlands, the UK and the World Health Organization

show that these rules have been largely ignored in favour of

minimal searches of the sources that are easiest to access5-8.

Global databases such as PubMed/Medline are excellent

Africa. The Declaration recognised that while evidence-based from low- or middle-income countries with respect to the

methodology had significantly improved health practice and types and patterns of cancer, levels of cancer incidence,

over the past two decades, it had not yet widely penetrated status, literacy rates and behaviour of populations, as well as

health care systems in Africa and that there is still insufficient with respect to the resources (human, physical or financial)

health research infrastructure and a lack of research projects that are available.

and programmes relevant to African needs. The signatories – A large proportion of papers relevant to low- and middle-

the majority of whom had travelled to Kigali, Rwanda from income countries will not be represented in these databases. A

on primary and secondary research relevant to African health in Medline9. The disparity between the number of papers that

needs and priorities.1” have been published and the number of published papers that

two rules for evidence gathering: 1) All existing sources of of research conducted in low- and middle -income countries.

evidence, especially systematic reviews, must be considered A substantial body of reports of scientific research studies

carefully before undertaking research3. 2) Ensuring that relevant to these poorer-resourced countries lies scattered

bias. Relying exclusively on one database will retrieve a set of non-indexed sources; generally unread and unreferenced. This

identified through a comprehensive search of several sources4. WHA58.22 of the World Health Assembly 2005 (Figure 1)