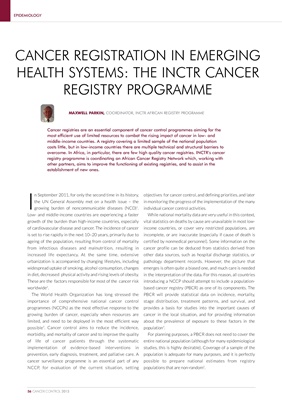 middle-income countries. A registry covering a limited sample of the national population

costs little, but in low-income countries there are multiple technical and structural barriers to

registry programme is coordinating an African Cancer Registry Network which, working with

other partners, aims to improve the functioning of existing registries, and to assist in the

establishment of new ones.

n September 2011, for only the second time in its history, objectives for cancer control, and defining priorities, and later

Low- and middle-income countries are experiencing a faster While national mortality data are very useful in this context,

growth of the burden than high-income countries, especially vital statistics on deaths by cause are unavailable in most low-

of cardiovascular disease and cancer. The incidence of cancer income countries, or cover very restricted populations, are

is set to rise rapidly in the next 10–20 years, primarily due to incomplete, or are inaccurate (especially if cause of death is

ageing of the population, resulting from control of mortality certified by nonmedical personnel). Some information on the

from infectious diseases and malnutrition, resulting in cancer profile can be deduced from statistics derived from

increased life expectancy. At the same time, extensive other data sources, such as hospital discharge statistics, or

urbanization is accompanied by changing lifestyles, including pathology department records. However, the picture that

widespread uptake of smoking, alcohol consumption, changes emerges is often quite a biased one, and much care is needed

in diet, decreased physical activity and rising levels of obesity. in the interpretation of the data. For this reason, all countries

worldwide2. based cancer registry (PBCR) as one of its components. The

The World Health Organization has long stressed the PBCR will provide statistical data on incidence, mortality,

growing burden of cancer, especially when resources are cancer in the local situation, and for providing information

limited, and need to be deployed in the most efficient way about the prevalence of exposure to these factors in the

morbidity, and mortality of cancer and to improve the quality For planning purposes, a PBCR does not need to cover the

implementation of evidence-based interventions in studies, this is highly desirable). Coverage of a sample of the

prevention, early diagnosis, treatment, and palliative care. A population is adequate for many purposes, and it is perfectly

NCCP, for evaluation of the current situation, setting populations that are non-random5.