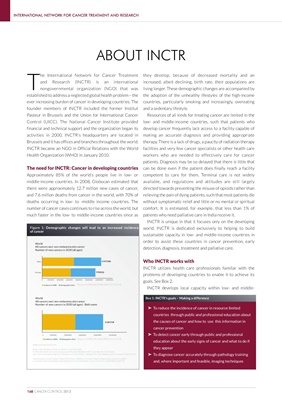 he International Network for Cancer Treatment they develop, because of decreased mortality and an

and Research (INCTR) is an international increased, albeit declining, birth rate, their populations are

nongovernmental organization (NGO) that was living longer. These demographic changes are accompanied by

ever increasing burden of cancer in developing countries. The countries, particularly smoking and increasingly, overeating

founder members of INCTR included the former Institut and a sedentary lifestyle.

Control (UICC). The National Cancer Institute provided low- and middle-income countries, such that patients who

activities in 2000. INCTR’s headquarters are located in making an accurate diagnosis and providing appropriate

Brussels and it has offices and branches throughout the world. therapy. There is a lack of drugs, a paucity of radiation therapy

Health Organization (WHO) in January 2010. workers who are needed to effectively care for cancer

patients. Diagnosis may be so delayed that there is little that

The need for INCTR: Cancer in developing countries can be done even if the patient does finally reach a facility

Approximately 85% of the world’s people live in low- or competent to care for them. Terminal care is not widely

middle-income countries. In 2008, Globocan estimated that available, and regulations and attitudes are still largely

there were approximately 12.7 million new cases of cancer, directed towards preventing the misuse of opioids rather than

and 7.6 million deaths from cancer in the world, with 70% of relieving the pain of dying patients, such that most patients die

deaths occurring in low- to -middle income countries. The without symptomatic relief and little or no mental or spiritual

number of cancer cases continues to rise across the world, but comfort. It is estimated, for example, that less than 1% of

much faster in the low- to middle-income countries since as patients who need palliative care in India receive it.

Figure 1: Demographic changes will lead to an increased incidence world. INCTR is dedicated exclusively to helping to build

sustainable capacity in low- and middle-income countries in

order to assist these countries in cancer prevention, early

Number of new cancers in 2030 (all ages) detection, diagnosis, treatment and palliative care.

‰ To reduce the incidence of cancer in resource limited

Adapted with permission from: