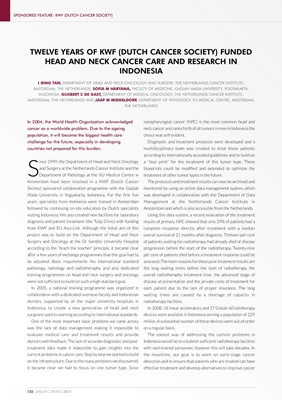 HEAD AND NECK CANCER CARE AND RESEARCH IN

I BING TAN, DEPARTMENT OF HEAD AND NECK ONCOLOGY AND SURGERY, THE NETHERLANDS CANCER INSTITUTE,

In 2004, the World Health Organization acknowledged nasopharyngeal cancer (NPC) is the most common head and

cancer as a worldwide problem. Due to the ageing neck cancer and ranks forth of all tumors in men in Indonesia the

population, it will become the biggest health care choice was self-evident.

challenge for the future; especially in developing Diagnostic and treatment protocols were developed and a

countries not prepared for this burden. multidisciplinary team was created to treat these patients

according to internationally accepted guidelines and to build on

ince 1999, the Department of Head and Neck Oncology a “blue print” for the treatment of this tumor type. These

Department of Pathology at the VU Medical Centre in treatment of other tumor types in the future.

Society) sponsored collaboration programme with the Gadjah monitored by using an online data-management system, which

Mada University in Yogyakarta, Indonesia. For the first five was developed in collaboration with the Department of Data

years, specialists from Indonesia were trained in Amsterdam Management at the Netherlands Cancer Institute in

followed by continuing on-site education by Dutch specialists Amsterdam and which is also accessible from the Netherlands.

visiting Indonesia. We also created new facilities for laboratory Using this data system, a recent evaluation of the treatment

from KWF and EU Asia-Link. Although the initial aim of this complete response directly after treatment with a median

project was to build on the Department of Head and Neck overall survival of 21 months after diagnosis. Thirteen per cent

according to the “teach the teacher” principle, it became clear progression before the start of the radiotherapy. Twenty-nine

be adjusted. Basic requirements like international standard assessed. The main reasons for these poor treatment results are

pathology, radiology and radiotheraphy and also dedicated the long waiting times before the start of radiotherapy, the

were not sufficient to build on such a high standard goal. disease at presentation and the private costs of treatment for

In 2005, a national training programme was organized in each patient due to the lack of proper insurance. The long

doctors, supported by all the major university hospitals in radiotherapy facilities.

Indonesia, to create a new generation of head and neck In 2008, 18 linear accelerators and 17 Cobalt-60 teletherapy

surgeons used to working according to international standards. devices were available in Indonesia serving a population of 229

One of the most important basic problems we came across million. A substantial number of these devices were out of order

was the lack of data management making it impossible to on a regular basis.

doctors with feedback. The lack of accurate diagnostic and post- Indonesia would be to establish sufficient radiotherapy facilities

treatment data made it impossible to gain insights into the with well-trained personnel, however this will take decades. In

current problems in cancer care. Step by step we started to build the meantime, our goal is to work on early-stage cancer

on the infrastructure. Due to the many problems we discovered, detection and to ensure that patients who are treated can have

it became clear we had to focus on one tumor type. Since effective treatment and develop alternatives to improve cancer