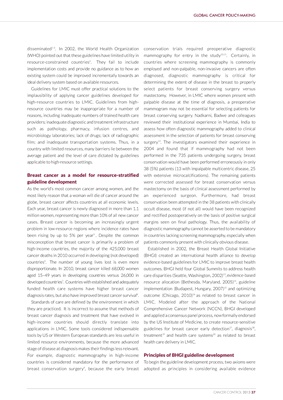 (WHO) pointed out that these guidelines have limited utility in mammography for entry in the study10,11. Certainly, in

resource-constrained countries . They fail to include countries where screening mammography is commonly

implementation costs and provide no guidance as to how an employed and non-palpable, non-invasive cancers are often

existing system could be improved incrementally towards an diagnosed, diagnostic mammography is critical for

ideal delivery system based on available resources. determining the extent of disease in the breast to properly

implausibility of applying cancer guidelines developed for mastectomy. However, in LMIC where women present with

high-resource countries to LMIC. Guidelines from high- palpable disease at the time of diagnosis, a preoperative

such as pathology, pharmacy, infusion centres, and assess how often diagnostic mammography added to clinical

microbiology laboratories; lack of drugs; lack of radiographic assessment in the selection of patients for breast conserving

film; and inadequate transportation systems. Thus, in a surgery12. The investigators examined their experience in

country with limited resources, many barriers lie between the 2004 and found that if mammography had not been

average patient and the level of care dictated by guidelines performed in the 735 patients undergoing surgery, breast

applicable to high-resource settings. conservation would have been performed erroneously in only

Breast cancer as a model for resource-stratified with extensive microcalcifications). The remaining patients

guideline development were corrected assessed for breast conservation versus

As the world’s most common cancer among women, and the mastectomy on the basis of clinical assessment performed by

most likely reason that a woman will die of cancer around the an experienced surgeon. Furthermore, had breast

globe, breast cancer affects countries at all economic levels. conservation been attempted in the 38 patients with clinically

Each year, breast cancer is newly diagnosed in more than 1.1 occult disease, most (if not all) would have been recognized

million women, representing more than 10% of all new cancer and rectified postoperatively on the basis of positive surgical

been rising by up to 5% per year . Despite the common in countries lacking screening mammography, especially when

misconception that breast cancer is primarily a problem of patients commonly present with clinically obvious disease.

high-income countries, the majority of the 425,000 breast Established in 2002, the Breast Health Global Initiative

countries6. The number of young lives lost is even more evidence-based guidelines for LMIC to improve breast health

Standards of care are defined by the environment in which LMIC. Modeled after the approach of the National

they are practiced. It is incorrect to assume that methods of Comprehensive Cancer Network (NCCN), BHGI developed

breast cancer diagnosis and treatment that have evolved in and applied a consensus panel process, now formally endorsed

high-income countries should directly translate into by the US Institute of Medicine, to create resource-sensitive

stage of disease at diagnosis makes their findings less relevant.

countries is considered mandatory for the performance of To begin the guideline development process, two axioms were