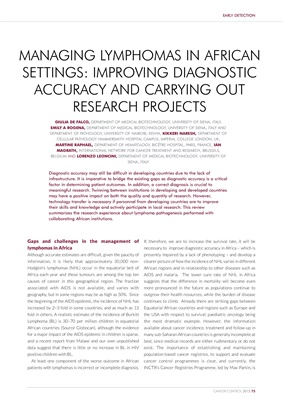 ACCURACY AND CARRYING OUT

EMILY A ROGENA, DEPARTMENT OF MEDICAL BIOTECHNOLOGY, UNIVERSITY OF SIENA, ITALY AND

BELGIUM AND LORENZO LEONCINI, DEPARTMENT OF MEDICAL BIOTECHNOLOGY, UNIVERSITY OF

infrastructure. It is imperative to bridge the existing gaps as diagnostic accuracy is a critical

factor in determining patient outcomes. In addition, a correct diagnosis is crucial to

meaningful research. Twinning between institutions in developing and developed countries

may have a positive impact on both the quality and quantity of research. However,

their skills and knowledge and actively participate in local research. This review

summarizes the research experience about lymphoma pathogenesis performed with

Gaps and challenges in the management of If, therefore, we are to increase the survival rate, it will be

Although accurate estimates are difficult, given the paucity of presently impaired by a lack of phenotyping – and develop a

information, it is likely that approximately 30,000 non- clearer picture of how the incidence of NHL varies in different

Africa each year and these tumours are among the top ten AIDS and malaria. The lower cure rate of NHL in Africa

causes of cancer in this geographical region. The fraction suggests that the difference in mortality will become even

associated with AIDS is not available, and varies with more pronounced in the future as populations continue to

geography, but in some regions may be as high as 50%. Since outgrow their health resources, while the burden of disease

the beginning of the AIDS epidemic, the incidence of NHL has continues to climb. Already there are striking gaps between

increased by 2–3 fold in some countries, and as much as 13 Equatorial African countries and regions such as Europe and

fold in others. A realistic estimate of the incidence of Burkitt the USA with respect to survival; paediatric oncology being

Lymphoma (BL) is 30–70 per million children in equatorial the most dramatic example. However, the information

African countries (Source Globocan), although the evidence available about cancer incidence, treatment and follow-up in

for a major impact of the AIDS epidemic in children is sparse, many sub-Saharan African countries is generally incomplete at

and a recent report from Malawi and our own unpublished best, since medical records are either rudimentary or do not

data suggest that there is little or no increase in BL in HIV exist. The importance of establishing and maintaining

At least one component of the worse outcome in African cancer control programmes is clear, and currently, the