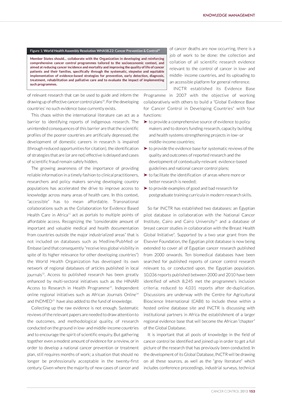 of cancer deaths are now occurring, there is a

job of work to be done: the collection and

Member States should… collaborate with the Organization in developing and reinforcing

comprehensive cancer control programmes tailored to the socioeconomic context, and collation of all scientific research evidence

relevant to the control of cancer in low- and

patients and their families, specifically through the systematic, stepwise and equitable

implementation of evidence-based strategies for prevention, early detection, diagnosis, middle- income countries, and its uploading to

treatment, rehabilitation and palliative care and to evaluate the impact of implementing

an accessible platform for general reference.

INCTR established its Evidence Base

drawing up of effective cancer control plans10. For the developing collaboratively with others to build a “Global Evidence Base

countries’ no such evidence base currently exists. for Cancer Control in Developing Countries” with four

This chaos within the international literature can act as a functions:

barrier to identifying reports of indigenous research. The ‰ to provide a comprehensive source of evidence to policy

unintended consequences of this barrier are that the scientific makers and to donors funding research, capacity building

profiles of the poorer countries are artificially depressed, the and health systems strengthening projects in low- or

development of domestic careers in research is impaired middle-income countries;

(through reduced opportunities for citation), the identification ‰ to provide the evidence base for systematic reviews of the

The growing awareness of the importance of providing guidelines and national cancer control plans;

reliable information in a timely fashion to clinical practitioners, ‰ to facilitate the identification of areas where more or

knowledge across many areas of health care. In this context, postgraduate training curricula in modern research skills.

“accessible” has to mean affordable. Transnational

collaborations such as the Collaboration for Evidence Based So far INCTR has established two databases: an Egyptian

affordable access. Recognizing the “considerable amount of Institute, Cairo and Cairo University16 and a database of

from countries outside the major industrialized areas” that is Global Initiative9. Supported by a two year grant from the

not included on databases such as Medline/PubMed or Elsevier Foundation, the Egyptian pilot database is now being

spite of its higher relevance for other developing countries”) from 2000 onwards. Ten biomedical databases have been

network of regional databases of articles published in local relevant to, or conducted upon, the Egyptian population.

journals . Access to published research has been greatly 10,036 reports published between 2000 and 2010 have been

enhanced by multi-sectoral initiatives such as the HINARI identified of which 8,245 met the programme’s inclusion

Access to Research in Health Programme . Independent criteria; reduced to 4,031 reports after de-duplication.

and INDMED have also added to the fund of knowledge. Bioscience International (CABI) to include these within a

Collecting up the raw evidence is not enough. Systematic hosted online database site and INCTR is discussing with

the outcomes, and methodological quality, of research regional evidence base that will become the African “chapter”

conducted on the ground in low- and middle-income countries of the Global Database.

and to encourage the spirit of scientific enquiry. But gathering It is important that all pools of knowledge in the field of

together even a modest amount of evidence for a review, or in cancer control be identified and joined up in order to get a full

order to develop a national cancer prevention or treatment picture of the research that has previously been conducted. In

plan, still requires months of work; a situation that should no the development of its Global Database, INCTR will be drawing

longer be professionally acceptable in the twenty-first on all these sources, as well as the “grey literature” which

century. Given where the majority of new cases of cancer and includes conference proceedings, industrial surveys, technical