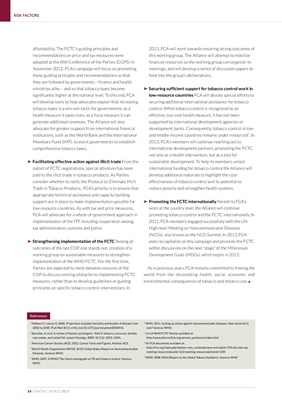 affordability. The FCTC’s guiding principles and 2013, FCA will work towards ensuring strong outcomes of

recommendations on price and tax measures were this working group. The Alliance will attempt to mobilize

November 2012. FCA’s campaign will focus on promoting meetings, and will develop a series of discussion papers to

these guiding principles and recommendations so that feed into the group’s deliberations.

they are followed by governments – finance and health

significantly higher at the national level. To this end, FCA low-resource countries FCA will devote special efforts to

tobacco taxes is a win-win tactic for governments: as a control. While tobacco control is recognized as an

generate additional revenues. The Alliance will also supported by international development agencies or

institutions, such as the World Bank and the International and middle-income countries remains under resourced9. In

Monetary Fund (IMF), to assist governments to establish 2013, FCA’s members will continue reaching out to

not only as a health intervention, but as a tool for

‰ Facilitating effective action against illicit trade From the sustainable development. To help its members unlock

outset of FCTC negotiations, special attention has been international funding for tobacco control the Alliance will

paid to the illicit trade in tobacco products. As Parties develop additional materials to highlight the cost-

Trade in Tobacco Products , FCA’s priority is to ensure that reduce poverty and strengthen health systems.

low-resource countries. As with tax and price measures, work at the country level, the Alliance will continue

FCA will advocate for a whole-of-government approach in promoting tobacco control and the FCTC internationally. In

implementation of the ITP, including cooperation among 2011, FCA members engaged successfully with the UN

outcomes of the last COP, one stands out: creation of a within discussions on the next “stage” of the Millennium

working group on sustainable measures to strengthen Development Goals (MDGs), which expire in 2015.

implementation of the WHO FCTC. For the first time,

Parties are expected to meet between sessions of the As in previous years, FCA remains committed to freeing the

COP to discuss existing obstacles to implementing FCTC world from the devastating health, social, economic and

measures, rather than to develop guidelines or guiding environmental consequences of tobacco and tobacco use. l

Mathers C, Loncar D. 2006. Projections of global mortality and burden of disease from WHO. 2011. Scaling up action against noncommunicable diseases: How much will it

WHO. 2007. A WHO/ The Union monograph on TB and tobacco control. Geneva: WHO. 2008. WHO Report on the Global Tobacco Epidemic. Geneva: WHO