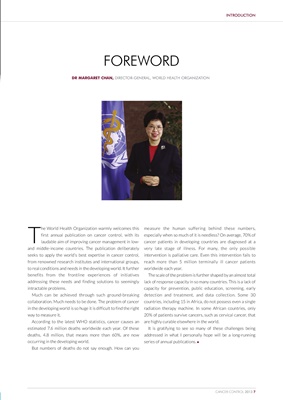 he World Health Organization warmly welcomes this measure the human suffering behind these numbers,

first annual publication on cancer control, with its especially when so much of it is needless? On average, 70% of

and middle-income countries. The publication deliberately very late stage of illness. For many, the only possible

seeks to apply the world’s best expertise in cancer control, intervention is palliative care. Even this intervention fails to

to real conditions and needs in the developing world. It further worldwide each year.

addressing these needs and finding solutions to seemingly lack of response capacity in so many countries. This is a lack of

Much can be achieved through such ground-breaking detection and treatment, and data collection. Some 30

collaboration. Much needs to be done. The problem of cancer countries, including 15 in Africa, do not possess even a single

in the developing world is so huge it is difficult to find the right radiation therapy machine. In some African countries, only

way to measure it. 20% of patients survive cancers, such as cervical cancer, that

According to the latest WHO statistics, cancer causes an are highly curable elsewhere in the world.

estimated 7.6 million deaths worldwide each year. Of these It is gratifying to see so many of these challenges being

deaths, 4.8 million, that means more than 60%, are now addressed in what I personally hope will be a long-running

occurring in the developing world. series of annual publications. l

But numbers of deaths do not say enough. How can you