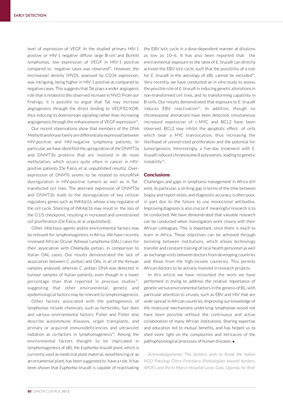 level of expression of VEGF. In the studied primary HIV-1 the EBV lytic cycle in a dose-dependent manner at dilutions

positive or HIV-1 negative diffuse large B-cell and Burkitt as low as 10–6. It has also been reported that the

lymphomas, low expression of VEGF in HIV-1 positive environmental exposure to the latex of E. tirucalli can directly

compared to negative cases was observed32. However, the activate the EBV lytic cycle, such that the possibility of a role

microvessel density (MVD), assessed by CD34 expression, for E. tirucalli in the aetiology of eBL cannot be excluded35.

was intriguing, being higher in HIV-1 positive as compared to Very recently, we have conducted an in vitro study to assess

negative cases. This suggests that Tat plays a wider angiogenic the possible role of E. tirucalli in inducing genetic alterations in

role that is related to the observed increase in MVD. From our non-transformed cell lines, and its transforming capability in

findings, it is possible to argue that Tat may increase B-cells. Our results demonstrated that exposure to E. tirucalli

angiogenesis through the direct binding to VEGFR2/KDR, induces EBV reactivation35. In addition, though no

thus inducing its downstream signaling rather than increasing chromosomal alterations have been detected, simultaneous

angiogenesis through the enhancement of VEGF expression . increased expression of c-MYC and BCL2 have been

Our recent observations show that members of the DNA observed. BCL2 may inhibit the apoptotic effect of cells

Methyltransferase family are differentially expressed between which bear a MYC translocation, thus increasing the

HIV-positive and HIV-negative lymphoma patients. In likelihood of unrestricted proliferation and the potential for

particular, we have identified the upregulation of the DNMT3a tumorigenesis. Interestingly, a five-day treatment with E.

and DNMT3b proteins that are involved in de novo tirucalli induced chromosome 8 polysomies, leading to genetic

methylation, which occurs quite often in cancer in HIV- instability35.

expression of DNMTs seems to be related to microRNA Conclusions

transfected cell lines. The aberrant expression of DNMT3a exist. In particular, a striking gap in terms of the time between

and DNMT3b leads to the dysregulation of key cellular biopsy and report exists, and diagnostic accuracy is often poor,

regulatory genes such as INK4/p16, whose a key regulator of in part due to the failure to use monoclonal antibodies.

the cell cycle. Silencing of INK4/p16 may result in the loss of Improving diagnosis is also crucial if meaningful research is to

the G1/S checkpoint, resulting in increased and unrestrained be conducted. We have demonstrated that valuable research

cell proliferation (De Falco, et al. unpublished). can be conducted when investigators work closely with their

Other infectious agents and/or environmental factors may African colleagues. This is important, since there is much to

be relevant for lymphomagenesis in Africa. We have recently learn in Africa. These objectives can be achieved through

their association with Chlamydia psittaci, in comparison to transfer and constant training of local health personnel as well

Italian OAL cases. Our results demonstrated the lack of as exchange visits between doctors from developing countries

association between C. psittaci and OAL in all of the Kenyan and those from the high-income countries. This permits

samples analysed, whereas C. psittaci DNA was detected in African doctors to be actively involved in research projects.

tumour samples of Italian patients, even though in a lower In this article we have recounted the work we have

percentage than that reported in previous studies , performed in trying to address the relative importance of

suggesting that other environmental, genetic and genetic versus environmental factors in the genesis of BL, with

epidemiological factors may be relevant to lymphomagenesis. particular attention to viruses, such as EBV and HIV that are

Other factors associated with the pathogenesis of wide-spread in African countries. Improving our knowledge of

lymphomas include chemicals, such as herbicides, hair dyes the molecular mechanisms underlying lymphomas would not

and various environmental factors. Fisher and Fisher also have been possible without the continuous and active

primary or acquired immunodeficiencies and ultraviolet and education led to mutual benefits, and has helped us to

radiation as co-factors in lymphomagenesis . Among the shed more light on the complexities and intricacies of the

environmental factors thought to be implicated in pathophysiological processes of human diseases. l

lymphomagenesis of eBL the Euphorbia tirucalli plant, which is

currently used as medicinal plant material, wood fencing or as Acknowledgements: The Authors wish to thank the Italian

an ornamental plant, has been suggested to have a role. It has NGO Patologi Oltre Frontiera (Pathologists beyond borders,

been shown that Euphorbia tirucalli is capable of reactivating APOF), and the St Mary’s Hospital Lacor, Gulu, Uganda, for their