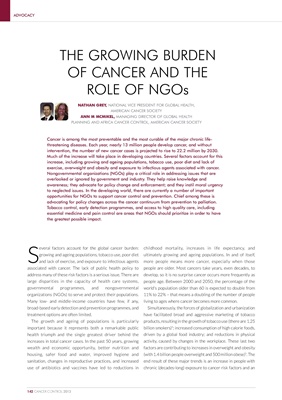 OF CANCER AND THE

intervention, the number of new cancer cases is projected to rise to 22.2 million by 2030.

Much of the increase will take place in developing countries. Several factors account for this

increase, including growing and ageing populations, tobacco use, poor diet and lack of

exercise, overweight and obesity and exposure to infectious agents associated with cancer.

overlooked or ignored by government and industry. They help raise knowledge and

awareness; they advocate for policy change and enforcement; and they instil moral urgency

to neglected issues. In the developing world, there are currently a number of important

opportunities for NGOs to support cancer control and prevention. Chief among these is

advocating for policy changes across the cancer continuum from prevention to palliation.

and lack of exercise, and exposure to infectious agents more people means more cancer, especially when those

associated with cancer. The lack of public health policy to people are older. Most cancers take years, even decades, to

address many of these risk factors is a serious issue. There are develop, so it is no surprise cancer occurs more frequently as

large disparities in the capacity of health care systems, people age. Between 2000 and 2050, the percentage of the

governmental programmes, and nongovernmental world’s population older than 60 is expected to double from

organizations (NGOs) to serve and protect their populations. 11% to 22% – that means a doubling of the number of people

Many low- and middle-income countries have few, if any, living to ages where cancer becomes more common.

broad-based early detection and prevention programmes, and Simultaneously, the forces of globalization and urbanization

treatment options are often limited. have facilitated broad and aggressive marketing of tobacco

The growth and ageing of populations is particularly products, resulting in the growth of tobacco use (there are 1.25

important because it represents both a remarkable public billion smokers)4; increased consumption of high calorie foods,

health triumph and the single greatest driver behind the driven by a global food industry; and reductions in physical

increases in total cancer cases. In the past 50 years, growing activity, caused by changes in the workplace. These last two

wealth and economic opportunity, better nutrition and factors are contributing to increases in overweight and obesity

housing, safer food and water, improved hygiene and (with 1.4 billion people overweight and 500 million obese)5. The

sanitation, changes in reproductive practices, and increased end result of these major trends is an increase in people with