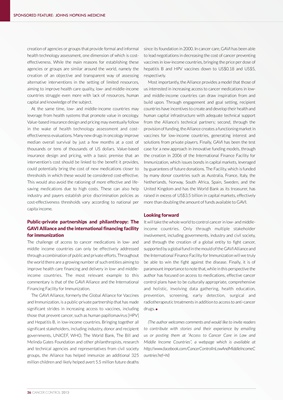 creation of agencies or groups that provide formal and informal since its foundation in 2000. In cancer care, GAVI has been able

health technology assessment, one dimension of which is cost- to lead negotiations in decreasing the cost of cancer preventing

effectiveness. While the main reasons for establishing these vaccines in low-income countries, bringing the price per dose of

agencies or groups are similar around the world, namely the hepatitis B and HPV vaccines down to US$0.18 and US$5,

creation of an objective and transparent way of assessing respectively.

alternative interventions in the setting of limited resources, Most importantly, the Alliance provides a model that those of

aiming to improve health care quality, low- and middle-income us interested in increasing access to cancer medications in low-

countries struggle even more with lack of resources, human and middle-income countries can draw inspiration from and

capital and knowledge of the subject. build upon. Through engagement and goal setting, recipient

At the same time, low- and middle-income countries may countries have incentives to create and develop their health and

Value-based insurance design and pricing may eventually follow from the Alliance’s technical partners; second, through the

in the wake of health technology assessment and cost- provision of funding, the Alliance creates a functioning market in

median overall survival by just a few months at a cost of solutions from private players. Finally, GAVI has been the test

thousands or tens of thousands of US dollars. Value-based case for a new approach in innovative funding models, through

insurance design and pricing, with a basic premise that an the creation in 2006 of the International Finance Facility for

intervention’s cost should be linked to the benefit it provides, Immunization, which issues bonds in capital markets, leveraged

could potentially bring the cost of new medications closer to by guarantees of future donations. The Facility, which is funded

thresholds in which these would be considered cost-effective. by many donor countries such as Australia, France, Italy, the

This would also avoid the rationing of more effective and life- Netherlands, Norway, South Africa, Spain, Sweden, and the

saving medications due to high costs. These can also help United Kingdom and has the World Bank as its treasurer, has

industry and payers establish price discrimination policies as raised in excess of US$3.5 billion in capital markets, effectively

cost-effectiveness thresholds vary according to national per more than doubling the amount of funds available to GAVI.

Public-private partnerships and philanthropy: The It will take the whole world to control cancer in low- and middle-

GAVI Alliance and the international financing facility income countries. Only through multiple stakeholder

for immunization involvement, including governments, industry and civil society,

The challenge of access to cancer medications in low- and and through the creation of a global entity to fight cancer,

through a combination of public and private efforts. Throughout the International Finance Facility for Immunization will we truly

the world there are a growing number of such entities aiming to be able to win the fight against the disease. Finally, it is of

improve health care financing and delivery in low- and middle- paramount importance to note that, while in this perspective the

income countries. The most relevant example to this author has focused on access to medications, effective cancer

commentary is that of the GAVI Alliance and the International control plans have to be culturally appropriate, comprehensive

and Immunization, is a public-private partnership that has made radiotherapeutic treatments in addition to access to anti-cancer

significant strides in increasing access to vaccines, including drugs. l

those that prevent cancer, such as human papillomavirus [HPV]

and Hepatitis B, in low-income countries. Bringing together all (The author welcomes comments and would like to invite readers

significant stakeholders, including industry, donor and recipient to contribute with stories and their experience by emailing

governments, UNICEF, WHO, The World Bank, The Bill and us or posting them at “Access to Cancer Care in Low and

Melinda Gates Foundation and other philanthropists, research Middle Income Countries”, a webpage which is available at

and technical agencies and representatives from civil society http://www.facebook.com/CancerControlInLowAndMiddleIncomeC

groups, the Alliance has helped immunize an additional 325 ountries?ref=hl)