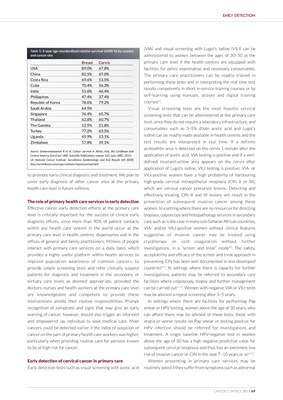 (VIA) and visual screening with Lugol’s iodine (VILI) can be

China 82.5% 67.0% The primary care practitioners can be readily trained in

performing these tests and in interpreting the real time test

results competently in short in-service training courses or by

Saudi Arabia 64.5% Visual screening tests are the most feasible cervical

Singapore 76.4% 65.7% screening tests that can be administered at the primary care

level, since they do not require a laboratory infrastructure, and

consumables such as 3–5% dilute acetic acid and Lugol’s

Uganda 45.9% 13.1% iodine can be readily made available in health centres and the

Zimbabwe 57.8% 39.1% test results are interpreted in real time. If a definite

acetowhite area is detected on the cervix 1-minute after the

defined mustard-yellow area appears on the cervix after

application of Lugol’s iodine, VILI testing is positive; VIA- or

to promote early clinical diagnosis and treatment. We plan to VILI-positive women have a high probability of harbouring

effectively treating CIN II and III lesions will result in the

Effective cancer early detection efforts at the primary care women. In a setting where there are no resources for directing

level is critically important for the success of clinical early biopsies, colposcopy and histopathology services in secondary

diagnosis efforts, since more than 90% of patient contacts care such as is the case in many sub-Saharan African countries,

primary care level in health centres, dispensaries and in the suggestive of invasive cancer may be treated using

offices of general and family practitioners. Millions of people cryotherapy or cold coagulation without further

interact with primary care services on a daily basis, which investigations, in a “screen and treat” mode8,9. The safety,

improve population awareness of common cancers, to preventing CIN has been well documented in less-developed

provide simple screening tests and refer clinically suspect countries8-10. In settings where there is capacity for further

patients for diagnosis and treatment in the secondary or investigations, patients may be referred to secondary care

doctors, nurses and health workers at the primary care level can be carried out11-13. Women with negative VIA or VILI tests

are knowledgeable and competent to provide these may be advised a repeat screening after 3–5 years.

interventions amidst their routine responsibilities. Prompt In settings where there are facilities for performing Pap

recognition of symptoms and signs that may give an early smear or HPV testing, women above the age of 30 years, who

warning of cancer, however, should also trigger an informed can afford them, may be advised of these tests; those with

and empowered lay individual to seek medical care. Most atypia or worse results on Pap smear or testing positive for

cancer on the part of primary health care workers was higher, treatment. A single baseline HPV-negative test in women

to be at high risk for cancer. subsequent cervical neoplasia and thus has an extremely low