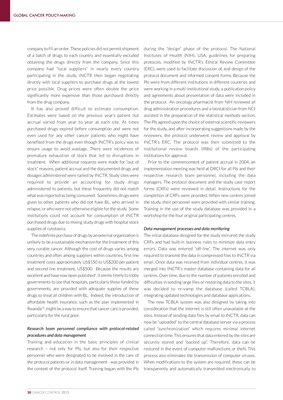 company to fill an order. These policies did not permit shipment during the “design” phase of the protocol. The National

of a batch of drugs to each country and essentially excluded Institutes of Health (NIH), USA, guidelines for preparing

obtaining the drugs directly from the company. Since this protocols, modified by INCTR’s Ethical Review Committee

company had “local suppliers” in nearly every country (ERC), were used to facilitate discussion of, and design of the

participating in the study, INCTR then began negotiating protocol document and informed consent forms. Because the

price possible. Drug prices were often double the price were working in a multi-institutional study, a publication policy

from the drug company. the protocol. An oncology pharmacist from NIH reviewed all

It has also proved difficult to estimate consumption. drug administration procedures and a biostatistician from NCI

Estimates were based on the previous year’s patient but assisted in the preparation of the statistical methods section.

accrual varied from year to year at each site. At times The PIs agreed upon the choice of external scientific reviewers

purchased drugs expired before consumption and were not for the study, and after incorporating suggestions made by the

even used for any other cancer patients who might have reviewers, the protocol underwent review and approval by

benefited from the drugs even though INCTR’s policy was to INCTR’s ERC. The protocol was then submitted to the

ensure usage to avoid wastage. There were incidences of institutional review boards (IRBs) of the participating

premature exhaustion of stock that led to disruptions in institutions for approval.

treatment. When additional requests were made for “out of Prior to the commencement of patient accrual in 2004, an

stock” reasons, patient accrual and the documented drugs and implementation meeting was held at ORCI for all PIs and their

dosages administered were tallied by INCTR. Study sites were respective research team personnel, including the data

required to provide an accounting for study drugs managers. The protocol document and the study case report

administered to patients, but these frequently did not match forms (CRFs) were reviewed in detail. Instructions for the

what was reported as being consumed. Sometimes, drugs were completion of CRFs were provided. When new centres joined

given to other patients who did not have BL, who arrived in the study, their personnel were provided with similar training.

relapse, or who were not otherwise eligible for the study. Some Training in the use of the study database was provided in a

institutions could not account for consumption of INCTR workshop for the four original participating centres.

purchased drugs due to mixing study drugs with hospital stock

very curable cancer. Although the cost of drugs varies among errors. Data was entered “off-line”. The internet was only

countries and often among suppliers within countries, first line required to transmit the data in compressed files to INCTR via

treatment costs approximately US$150 to US$200 per patient email. Once data was received from individual centres, it was

and second line treatment, US$500. Because the results are merged into INCTR’s master database containing data for all

excellent and have now been published , it seems timely to lobby centres. Over time, due to the number of patients enrolled and

governments to see that hospitals, particularly those funded by difficulties in sending large files or restoring data to the sites, it

governments, are provided with adequate supplies of these was decided to re-vamp the database (called TCBLA),

drugs to treat all children with BL. Indeed, the introduction of integrating updated technologies and database applications.

affordable health insurance, such as the plan implemented in The new TCBLA system was also designed by taking into

Rwanda7,8, might be a way to ensure that cancer care is provided, consideration that the internet is still often unavailable at the

particularly for the rural poor. sites. Instead of sending data files by email to INCTR, data can

now be “uploaded” to the central database server via a process

procedures and data management connection time. This ensures that data entered by the sites are

Training and education in the basic principles of clinical securely stored and “backed up”. Therefore, data can be

research – not only for PIs, but also for their respective restored in the event of computer malfunctions or theft. This

personnel who were designated to be involved in the care of process also eliminates the transmission of computer viruses.

the protocol patients or in data management - was provided in When modifications to the system are required, these can be

the context of the protocol itself. Training began with the PIs transparently and automatically transmitted electronically to