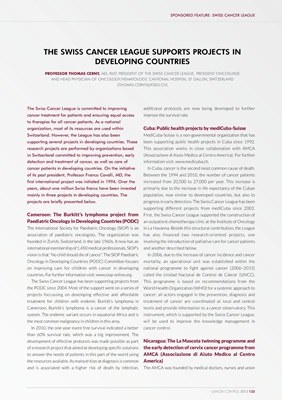 to therapies for all cancer patients. As a national

organization, most of its resources are used within Cuba: Public health projects by mediCuba-Suisse

Switzerland. However, the League has also been MediCuba-Suisse is a non-governmental organization that has

detection and treatment of cancer, as well as care of information visit: www.medicuba.ch.

cancer patients in developing countries. On the initiative In Cuba, cancer is the second most common cause of death.

of its past president, Professor Franco Cavalli, MD, the Between the 1994 and 2010, the number of cancer patients

years, about one million Swiss francs have been invested primarily due to the increase in life expectancy of the Cuban

mainly in three projects in developing countries. The population, now similar to developed countries, but also to

projects are briefly presented below. progress in early detection. The Swiss Cancer League has been

supporting different projects from mediCuba since 2002.

Cameroon: The Burkitt’s lymphoma project from First, the Swiss Cancer League supported the construction of

The International Society for Paediatric Oncology (SIOP) is an in La Havanna. Beside this structural contribution, the League

association of paediatric oncologists. The organization was has also financed two research-oriented projects, one

founded in Zurich, Switzerland, in the late 1960s. It now has an involving the introduction of palliative care for cancer patients

international membership of 1,450 medical professionals. SIOP’s and another described below.

vision is that “No child should die of cancer”. The SIOP Paediatric In 2006, due to the increase of cancer incidence and cancer

Oncology in Developing Countries (PODC) Committee focuses mortality, an operational unit was established within the

the PODC since 2004. Most of the support went on a series of World Health Organization (WHO) for a systemic approach to

projects foccussing on developing effective and affordable cancer: all actors engaged in the prevention, diagnosis and

Cameroon. Burkitt’s lymphoma is a cancer of the lymphatic levels and provide information to a cancer observatory. This

system. The endemic variant occurs in equatorial Africa and is instrument, which is supported by the Swiss Cancer League,

the most common malignancy in children in this area. will be used to improve the knowledge management in

than 60% survival rate, which was a big improvement. The

development of effective protocols was made possible as part Nicaragua: The La Mascota twinning programme and

the resources available. As malnutrition at diagnosis is common America)

and is associated with a higher risk of death by infection, The AMCA was founded by medical doctors, nurses and union