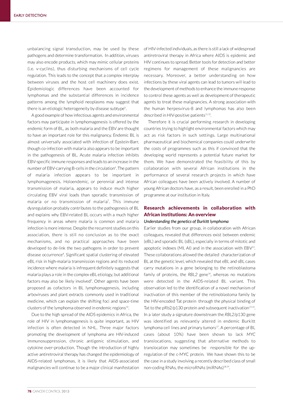 unbalancing signal transduction, may be used by these of HIV-infected individuals, as there is still a lack of widespread

pathogens and determine transformation. In addition, viruses antiretroviral therapy in Africa where AIDS is epidemic and

may also encode products, which may mimic cellular proteins HIV continues to spread. Better tools for detection and better

(i.e. v-cyclins), thus disturbing mechanisms of cell cycle regimens for management of these malignancies are

regulation. This leads to the concept that a complex interplay necessary. Moreover, a better understanding on how

between viruses and the host cell machinery does exist. infections by these viral agents can lead to tumors will lead to

patterns among the lymphoid neoplasms may suggest that agents to treat these malignancies. A strong association with

there is an etiologic heterogeneity by disease subtype . the human herpesvirus-8 and lymphomas has also been

A good example of how infectious agents and environmental described in HIV-positive patients11,12.

endemic form of BL, as both malaria and the EBV are thought countries trying to highlight environmental factors which may

to have an important role for this malignancy. Endemic BL is act as risk factors in such settings. Large multinational

almost universally associated with infection of Epstein-Barr, pharmaceutical and biochemical companies could underwrite

EBV-specific immune responses and leads to an increase in the them. We have demonstrated the feasibility of this by

number of EBV-carrying B-cells in the circulation6. The pattern collaboration with several African institutions in the

lymphomagenesis. Holoendemic, or perennial and intense African colleagues have been actively involved. A number of

transmission of malaria, appears to induce much higher young African doctors have, as a result, been enrolled in a PhD

circulating EBV viral loads than sporadic transmission of programme at our institution in Italy.

malaria or no transmission of malaria . This immune

and explains why EBV-related BL occurs with a much higher African institutions: An overview

infection is more intense. Despite the recurrent studies on this Earlier studies from our group, in collaboration with African

association, there is still no conclusion as to the exact colleagues, revealed that differences exist between endemic

mechanisms, and no practical approaches have been (eBL) and sporadic BL (sBL), especially in terms of mitotic and

developed to de-link the two pathogens in order to prevent apoptotic indexes (MI, AI) and in the association with EBV13.

eBL risk in high-malaria transmission regions and its reduced BL at the genetic level, which revealed that eBL and sBL cases

malaria plays a role in the complex eBL etiology, but additional family of proteins, the RBL2 gene14, whereas no mutations

factors may also be likely involved9. Other agents have been were detected in the AIDS-related BL variant. This

proposed as cofactors in BL lymphomagenesis, including observation led to the identification of a novel mechanism of

medicine, which can explain the shifting foci and space-time the HIV-encoded Tat protein through the physical binding of

clusters of the lymphoma observed in endemic regions . Tat to the pRb2/p130 protein and subsequent inactivation15,16.

Due to the high spread of the AIDS epidemics in Africa, the In a later study a signature downstream the RBL2/p130 gene

role of HIV in lymphomagenesis is quite important, as HIV was identified as relevantly altered in endemic Burkitt

cytokine over-production. Though the introduction of highly translocation may sometimes be responsible for the up-

active antiretroviral therapy has changed the epidemiology of regulation of the c-MYC protein. We have shown this to be

AIDS-related lymphomas, it is likely that AIDS-associated the case in a study involving a recently described class of small

malignancies will continue to be a major clinical manifestation non-coding RNAs, the microRNAs (miRNAs)18,19.