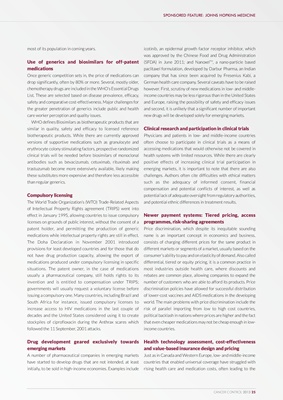 most of its population in coming years. icotinib, an epidermal growth factor receptor inhibitor, which

was approved by the Chinese Food and Drug Administration

Use of generics and biosimilars for off-patent (SFDA) in June 2011; and NanoxelTM, a nano-particle based

Once generic competition sets in, the price of medications can company that has since been acquired by Fresenius Kabi, a

chemotherapy drugs are included in the WHO’s Essential Drugs however. First, scrutiny of new medications in low- and middle-

List. These are selected based on disease prevalence, efficacy, income countries may be less rigorous than in the United States

safety and comparative cost-effectiveness. Major challenges for and Europe, raising the possibility of safety and efficacy issues

the greater penetration of generics include public and health and second, it is unlikely that a significant number of important

WHO defines Biosimilars as biotherapeutic products that are

similar in quality, safety and efficacy to licensed reference Clinical research and participation in clinical trials

biotherapeutic products. While there are currently approved Physicians and patients in low- and middle-income countries

erythrocyte colony stimulating factors, prospective randomized accessing medications that would otherwise not be covered in

clinical trials will be needed before biosimilars of monoclonal health systems with limited resources. While there are clearly

antibodies such as bevacizumab, cetuximab, rituximab and positive effects of increasing clinical trial participation in

trastuzumab become more extensively available, likely making emerging markets, it is important to note that there are also

than regular generics. such as the adequacy of informed consent, financial

compensation and potential conflicts of interest, as well as

licenses on grounds of public interest, without the consent of a programmes, risk-sharing agreements

patent holder, and permitting the production of generic Price discrimination, which despite its inequitable sounding

medications while intellectual property rights are still in effect. name is an important concept in economics and business,

provisions for least developed countries and for those that do different markets or segments of a market, usually based on the

not have drug production capacity, allowing the export of consumer’s ability to pay and on elasticity of demand. Also called

medications produced under compulsory licensing in specific differential, tiered or equity pricing, it is a common practice in

situations. The patent owner, in the case of medications most industries outside health care, where discounts and

usually a pharmaceutical company, still holds rights to its rebates are common place, allowing companies to expand the

invention and is entitled to compensation under TRIPS; number of customers who are able to afford its products. Price

issuing a compulsory one. Many countries, including Brazil and of lower-cost vaccines and AIDS medications in the developing

South Africa for instance, issued compulsory licenses to world. The main problems with price discrimination include the

increase access to HIV medications in the last couple of risk of parallel importing from low to high cost countries,

A number of pharmaceutical companies in emerging markets Just as in Canada and Western Europe, low- and middle-income

have started to develop drugs that are not intended, at least countries that enabled universal coverage have struggled with

initially, to be sold in high-income economies. Examples include rising health care and medication costs, often leading to the