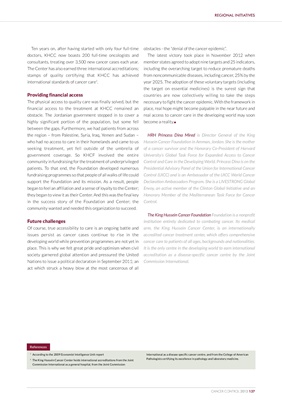 Ten years on, after having started with only four full-time obstacles - the “denial of the cancer epidemic”.

The Center has also earned three international accreditations; including the overarching target to reduce premature deaths

stamps of quality certifying that KHCC has achieved from noncommunicable diseases, including cancer, 25% by the

international standards of cancer care2. year 2025. The adoption of these voluntary targets (including

the target on essential medicines) is the surest sign that

The physical access to quality care was finally solved, but the necessary to fight the cancer epidemic. With the framework in

financial access to the treatment at KHCC remained an place, real hope might become palpable in the near future and

obstacle. The Jordanian government stepped in to cover a real access to cancer care in the developing world may soon

highly significant portion of the population, but some fell become a reality.l

between the gaps. Furthermore, we had patients from across

the region – from Palestine, Syria, Iraq, Yemen and Sudan – HRH Princess Dina Mired is Director General of the King

who had no access to care in their homelands and came to us Hussein Cancer Foundation in Amman, Jordan. She is the mother

seeking treatment, yet fell outside of the umbrella of of a cancer survivor and the Honorary Co-President of Harvard

community in fundraising for the treatment of underprivileged Control and Care in the Developing World. Princess Dina is on the

patients. To that end, the Foundation developed numerous Presidential Advisory Panel of the Union for International Cancer

support the Foundation and its mission. As a result, people Declaration Ambassadors Program. She is a LIVESTRONG Global

began to feel an affiliation and a sense of loyalty to the Center; Envoy, an active member of the Clinton Global Initiative and an

they began to view it as their Center. And this was the final key Honorary Member of the Mediterranean Task Force for Cancer

in the success story of the Foundation and Center; the Control.

community wanted and needed this organization to succeed.

Of course, true accessibility to care is an ongoing battle and arm, the King Hussein Cancer Center, is an internationally

developing world while prevention programmes are not yet in cancer care to patients of all ages, backgrounds and nationalities.

place. This is why we felt great pride and optimism when civil It is the only centre in the developing world to earn international

Nations to issue a political declaration in September 2011; an Commission International.

According to the 2009 Economist Intelligence Unit report International as a disease specific cancer centre, and from the College of American

The King Hussein Cancer Center holds international accreditations from the Joint Pathologists certifying its excellence in pathology and laboratory medicine.

Commission International as a general hospital, from the Joint Commission