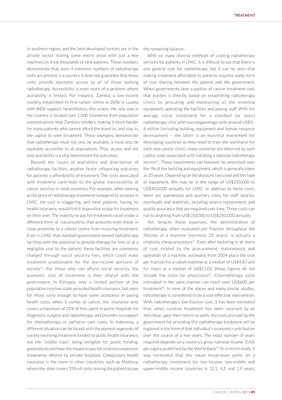 in southern region, and the best-developed centres are in the the remaining balance.

machines to treat thousands of new patients. These numbers services for patients in LMIC, it is difficult to say that there is

demonstrate that, even if extensive numbers of radiotherapy one general cost for radiotherapy, but it can be seen that

units are present in a country, it does not guarantee that these making treatment affordable to patients requires some form

units provide equitable access to all of those seeking of cost sharing between the patient and the government.

radiotherapy. Accessibility is even more of a problem where When governments bear a portion of cancer treatment cost,

availability is limited. For instance, Zambia, a low-income that burden is directly based on establishing radiotherapy

country, established its first cancer centre in 2006 in Lusaka clinics by procuring and maintaining all the essential

with IAEA support. Nevertheless, this centre, the only one in equipment, operating the facilities and paying staff. With the

the country, is located over 1,000 kilometres from population average initial investment for a standard (or basic)

concentrations near Zambia’s borders, making it much harder radiotherapy clinic with two megavoltage units around US$5–

for many patients who cannot afford the travel to, and stay in, 6 million (including building, equipment and human resource

the capital to seek treatment. These examples demonstrate development – the latter is an essential investment for

that radiotherapy must not only be available, it must also be developing countries as they need to train the workforce for

equitably accessible to all populations. Thus, access and not each new cancer clinic), many countries are deterred by such

only availability is a vital determinant for outcomes. capital costs associated with initiating a national radiotherapy

Beyond the issues of availability and distribution of service12. These investments can however be amortised over

radiotherapy facilities, another factor influencing outcomes the life of the building and equipment, which is generally taken

for patients is affordability of treatment. The costs associated as 20 years. Depending on the discount rate used and the type

with treatment contribute to the global inaccessibility of of equipment, this may be in the range of US$250,000 to

cancer services in most countries. For example, when looking US$400,000 annually for LMIC. In addition to these costs,

at the price of radiotherapy treatment compared to incomes in there are operational and auxiliary costs for staff salaries,

LMIC, the cost is staggering, and most patients, having no overheads and materials, including source replacement, and

health insurance, would find it impossible to pay for treatment quality assurance that are required over time. These costs can

different form of inaccessibility that prevents even those in Yet, despite these expenses, the administration of

close proximity to a cancer centre from receiving treatment. radiotherapy, when evaluated per fraction throughout the

Even in LMIC that maintain government-owned radiotherapy lifetime of a machine (normally 20 years), is actually a

facilities with the potential to provide therapy for free or at a relatively cheap procedure19. Even after factoring in all levels

negligible cost to the patient, these facilities are commonly of cost related to the procurement, maintenance and

charged through social security fees, which could make operation of a machine, estimates from 2004 place the cost

treatment unattainable for the low-income portions of per fraction for a cobalt machine at a median of US$4.87 and

society16. For those who can afford social security, the for linacs at a median of US$11.02 (these figures do not

economic cost of treatment is then shared with the include the costs for physicians)20. Chemotherapy costs

government. In Ethiopia, only a limited portion of the estimated in the same manner can reach over US$600 per

population receives state-provided health insurance, but, even treatment20. In view of the above and many similar studies,

for those lucky enough to have some assistance in paying radiotherapy is considered to be a cost-effective intervention.

health costs, when it comes to cancer, the insurance only With radiotherapy’s low fraction cost, it has been estimated

covers a maximum of 25% of fees spent in public hospitals for that, when curative treatment has been received by an

diagnostic, surgery and radiotherapy, and provides no support individual, upon their return to work, the costs accrued by the

for chemotherapy or palliative care costs. In Indonesia, a government for providing this radiotherapy treatment will be

different situation can be found, with the poorest segments of regained in the form of that individual’s economic contribution

society receiving treatment funded by public health insurance, over the course of a few years. The exact number of years

but the “middle class”, being ineligible for public funding, required depends on a country’s gross national income (GNI)

generally do not have the means to pay for relatively expensive per capita as defined by the World Bank33. In a recent study, it

treatments offered by private hospitals. Compulsory health was estimated that the mean break-even point on a

insurance is the norm in other countries, such as Moldova, radiotherapy investment for low-income, low-middle and