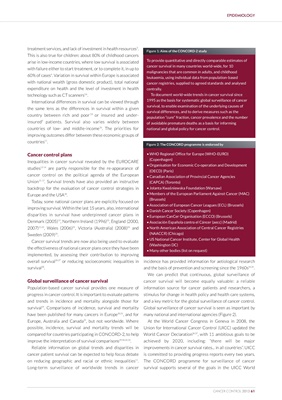 treatment services, and lack of investment in health resources3. Figure 1: Aims of the CONCORD-2 study

This is also true for children: about 80% of childhood cancers

arise in low-income countries, where low survival is associated To provide quantitative and directly comparable estimates of

cancer survival in many countries world-wide, for 10

with failure either to start treatment, or to complete it, in up to

malignancies that are common in adults, and childhood

60% of cases4. Variation in survival within Europe is associated leukaemia, using individual data from population-based

expenditure on health and the level of investment in health centrally.

technology such as CT scanners5,6. To document world-wide trends in cancer survival since

survival, to enable examination of the underlying causes of

the same lens as the differences in survival within a given

survival differences, and to derive measures such as the

country between rich and poor7,8 or insured and under- population “cure” fraction, cancer prevalence and the number

insured9 patients. Survival also varies widely between of avoidable premature deaths as a basis for informing

countries of low- and middle-income10. The priorities for national and global policy for cancer control.

improving outcomes differ between these economic groups of

Figure 2: The CONCORD programme is endorsed by

Inequalities in cancer survival revealed by the EUROCARE

• Organisation for Economic Co-operation and Development

studies12-14 are partly responsible for the re-appearance of

Europe and the USA18. • Members of the European Parliament Against Cancer (MAC)

Today, some national cancer plans are explicitly focused on

Cancer survival trends are now also being used to evaluate

the effectiveness of national cancer plans once they have been

implemented, by assessing their contribution to improving

survival . and the basis of prevention and screening since the 1960s34,35.

We can predict that continuous, global surveillance of

Population-based cancer survival provides one measure of information source for cancer patients and researchers, a

progress in cancer control. It is important to evaluate patterns stimulus for change in health policy and health care systems,

and trends in incidence and mortality alongside those for and a key metric for the global surveillance of cancer control.

survival . Comparisons of incidence, survival and mortality Global surveillance of cancer survival is seen as important by

have been published for many cancers in Europe30,31, and for many national and international agencies (Figure 2).

Europe, Australia and Canada , but not worldwide. Where At the World Cancer Congress in Geneva in 2008, the

possible, incidence, survival and mortality trends will be Union for International Cancer Control (UICC) updated the

compared for countries participating in CONCORD-2, to help World Cancer Declaration36,37, with 11 ambitious goals to be

improve the interpretation of survival comparisons . achieved by 2020, including: “there will be major

Reliable information on global trends and disparities in improvements in cancer survival rates... in all countries”. UICC

cancer patient survival can be expected to help focus debate is committed to providing progress reports every two years.

on reducing geographic and racial or ethnic inequalities . The CONCORD programme for surveillance of cancer