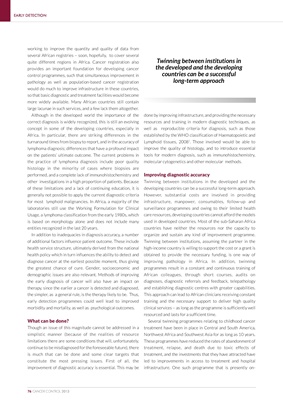 working to improve the quantity and quality of data from

quite different regions in Africa. Cancer registration also Twinning between institutions in

control programmes, such that simultaneous improvement in countries can be a successful

would do much to improve infrastructure in these countries,

so that basic diagnostic and treatment facilities would become

large lacunae in such services, and a few lack them altogether.

Although in the developed world the importance of the done by improving infrastructure, and providing the necessary

correct diagnosis is widely recognized, this is still an evolving resources and training in modern diagnostic techniques, as

concept in some of the developing countries, especially in well as reproducible criteria for diagnosis, such as those

Africa. In particular, there are striking differences in the established by the WHO classification of Haematopoietic and

turnaround times from biopsy to report, and in the accuracy of Lymphoid tissues, 20081. Those involved would be able to

lymphoma diagnosis; differences that have a profound impact improve the quality of histology, and to introduce essential

on the patients’ ultimate outcome. The current problems in tools for modern diagnosis, such as immunohistochemistry,

the practice of lymphoma diagnosis include poor quality molecular cytogenetics and other molecular methods.

histology in the minority of cases where biopsies are

performed, and a complete lack of immunohistochemistry and Improving diagnostic accuracy

other investigations in a high proportion of patients. Because Twinning between institutions in the developed and the

of these limitations and a lack of continuing education, it is developing countries can be a successful long-term approach.

generally not possible to apply the current diagnostic criteria However, substantial costs are involved in providing

for most lymphoid malignancies. In Africa, a majority of the infrastructure, manpower, consumables, follow-up and

is based on morphology alone and does not include many used in developed countries. Most of the sub-Saharan Africa

entities recognized in the last 20 years. countries have neither the resources nor the capacity to

In addition to inadequacies in diagnosis accuracy, a number organize and sustain any kind of improvement programme.

of additional factors influence patient outcome. These include Twinning between institutions, assuming the partner in the

health service structure, ultimately derived from the national high-income country is willing to support the cost or a grant is

health policy which in turn influences the ability to detect and obtained to provide the necessary funding, is one way of

the greatest chance of cure. Gender, socioeconomic and programmes result in a constant and continuous training of

the early diagnosis of cancer will also have an impact on diagnoses, diagnostic referrals and feedback, telepathology

therapy, since the earlier a cancer is detected and diagnosed, and establishing diagnostic centres with greater capabilities.

the simpler, as a general rule, is the therapy likely to be. Thus, This approach can lead to African clinicians receiving constant

morbidity and mortality, as well as psychological outcomes. clinical services – as long as the programme is sufficiently well

resourced and lasts for a sufficient time.

What can be done? Several twinning programmes relating to childhood cancer

Though an issue of this magnitude cannot be addressed in a treatment have been in place in Central and South America,

simplistic manner (because of the realities of resource Northwest Africa and Southwest Asia for as long as 10 years.

limitations there are some conditions that will, unfortunately, These programmes have reduced the rates of abandonment of

continue to be misdiagnosed for the foreseeable future), there treatment, relapse, and death due to toxic effects of

is much that can be done and some clear targets that treatment, and the investments that they have attracted have

constitute the most pressing issues. First of all, the led to improvements in access to treatment and hospital

improvement of diagnostic accuracy is essential. This may be infrastructure. One such programme that is presently on-