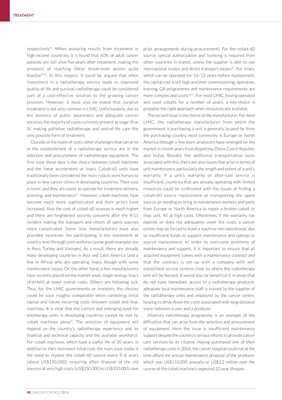 respectively34. When analysing results from treatment in prior arrangements during procurement). For the cobalt-60

high-income countries, it is found that 60% of adult cancer source, special authorization and licensing is required from

patients are still alive five years after treatment, making the other countries in transit, unless the supplier is able to use

prospect of reaching these break-even points quite international routes and direct transport means20. For linacs,

feasible . In this respect, it could be argued that when which can be operated for 10–12 years before replacement,

investment in a radiotherapy service leads to improved the capital cost is still high and their commissioning, operation,

quality of life and survival, radiotherapy could be considered training, QA programmes and maintenance requirements are

part of a cost-effective solution to the growing cancer more complex and costly18,21. For most LMIC, having operated

problem. However, it must also be noted that curative and used cobalts for a number of years, a mix-choice is

treatment is not very common in LMIC. Unfortunately, due to probably the right approach when resources are available.

the absence of public awareness and adequate cancer The second issue is the choice of the manufacturer. For most

services, the majority of cases currently present at stage III or LMIC, the radiotherapy manufacturer from which the

IV, making palliative radiotherapy and end-of-life care the government is purchasing a unit is generally located far from

only possible form of treatment. the purchasing country, most commonly in Europe or North

Outside of the realm of costs, other challenges that can arise America (though a few more producers have emerged on the

in the establishment of a radiotherapy service are in the market in recent years from Argentina, China, Czech Republic

selection and procurement of radiotherapy equipment. The and India). Besides the additional transportation costs

first issue these days is the choice between cobalt machines associated with this, there are also issues that arise in terms of

and the linear accelerators or linacs. Cobalt-60 units have unit maintenance, particularly the length and extent of a unit’s

traditionally been considered the more robust work horses to warranty. If a unit’s warranty or after-sale service is

place in new cancer clinics in developing countries. Their cost insufficient, countries that are already operating with limited

is lower, and they are easier to operate for treatment delivery, resources could be confronted with the issues of finding a

planning, and maintenance . However, cobalt machines have cobalt-60 source replacement or transporting the spent

become much more sophisticated and their prices have source, or needing to bring in maintenance workers and parts

increased. Also the cost of cobalt-60 sources is much higher from Europe or North America to repair a broken cobalt or

and there are heightened security concerns after the 9/11 linac unit. All at high costs. Oftentimes, if the warranty has

incident making the transport and return of spent sources expired, or does not adequately cover the costs, a cancer

more complicated. Some linac manufacturers have also centre may be forced to leave a machine non-operational, due

country level through joint ventures (some good examples are source replacement. In order to overcome problems of

in Peru, Turkey and Vietnam). As a result, there are already maintenance and support, it is important to ensure that all

few in Africa) who are operating linacs, though with some that the contract is set up with a company with well

maintenance issues. On the other hand, a few manufacturers established service centres close to where the radiotherapy

have recently placed on the market small, single-energy linacs unit will be housed. It would also be beneficial if, in areas that

(4-6MeV) at lower overall costs. Others are following suit. do not have immediate access to a radiotherapy producer,

Thus, for the LMIC governments or investors, the choices adequate local maintenance staff is trained by the supplier of

could be soon roughly comparable when combining initial the radiotherapy units and employed by the cancer centre,

machines. It is clear that the current and emerging need for travel between a user and a producer.

cobalt machines alone37. The selection of equipment will difficulties that can arise from the selection and procurement

depend on the country’s radiotherapy experience and its of equipment. Here the issue is insufficient maintenance

financial and technical capacity and the available workforce. support despite the country’s serious efforts to provide cancer

For cobalt machines, which have a useful life of 20 years, in care services to its citizens. Having purchased one of their

addition to their increased initial cost, the main issue today is radiotherapy units in 2006, the cancer hospital could not at the

the need to replace the cobalt-60 source every 5–6 years time afford the annual maintenance proposal of the producer,