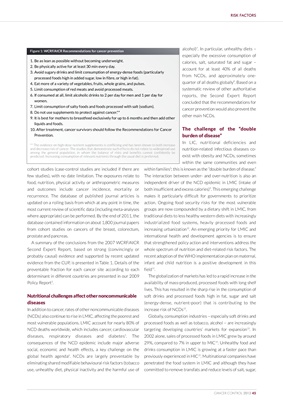 especially the excessive consumption of

1. Be as lean as possible without becoming underweight. calories, salt, saturated fat and sugar –

2. Be physically active for at least 30 min every day.

from NCDs, and approximately one-

processed foods high in added sugar, low in fibre, or high in fat).

4. Eat more of a variety of vegetables, fruits, whole grains, and pulses. quarter of all deaths globally8. Based on a

6. If consumed at all, limit alcoholic drinks to 2 per day for men and 1 per day for reports, the Second Expert Report

women. concluded that the recommendations for

cancer prevention would also prevent the

8. Do not use supplements to protect against cancer.**

9. It is best for mothers to breastfeed exclusively for up to 6 months and then add other

10. After treatment, cancer survivors should follow the Recommendations for Cancer The challenge of the “double

In LIC, nutritional deficiencies and

and decrease risk of cancer. The studies that demonstrate such effects do not relate to widespread use nutrition-related infectious diseases co-

among the general population, in whom the balance of risks and benefits cannot confidently be

predicted. Increasing consumption of relevant nutrients through the usual diet is preferred. exist with obesity and NCDs, sometimes

within the same communities and even

cohort studies (case-control studies are included if there are within families ; this is known as the “double burden of disease.”

few studies), with no date limitation. The exposures relate to The interaction between under- and over-nutrition is also an

and outcomes include cancer incidence, mortality or both insufficient and excess calories)9. This emerging challenge

recurrence. The database of published journal articles is makes it particularly difficult for governments to prioritize

updated on a rolling basis from which at any point in time, the action. Ongoing food security risks for the most vulnerable

most current review of scientific data (including meta-analyses groups are now compounded by a dietary shift in LMIC, from

where appropriate) can be performed. By the end of 2011, the traditional diets to less healthy western diets with increasingly

from cohort studies on cancers of the breast, colorectum, increasing urbanization10. An emerging priority for LMIC and

prostate and pancreas. international health and development agencies is to ensure

Second Expert Report, based on strong (convincingly or whole spectrum of nutrition and diet-related risk factors. The

probably causal) evidence and supported by recent updated recent adoption of the WHO implementation plan on maternal,

evidence from the CUP, is presented in Table 1. Details of the infant and child nutrition is a positive development in this

preventable fraction for each cancer site according to each field11.

lives. This has resulted in the sharp rise in the consumption of

diseases (energy-dense, nutrient-poor) that is contributing to the

In addition to cancer, rates of other noncommunicable diseases increase risk of NCDs12.

most vulnerable populations. LMIC account for nearly 80% of processed foods as well as tobacco, alcohol – are increasingly

diseases, respiratory diseases and diabetes5. The 2002 alone, sales of processed foods in LMIC grew by around

consequences of the NCD epidemic include major adverse 29%, compared to 7% in upper to MIC14. Unhealthy food and

social, economic and health effects, a key challenge on the drinks consumption in LMIC is growing at a faster pace than

use, unhealthy diet, physical inactivity and the harmful use of committed to remove transfats and reduce levels of salt, sugar,