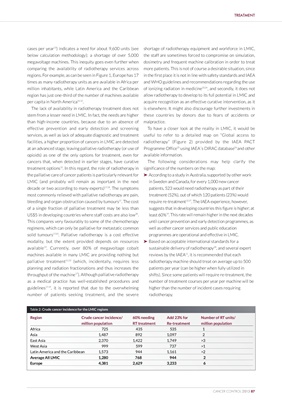 cases per year15) indicates a need for about 9,600 units (see shortage of radiotherapy equipment and workforce in LMIC,

below calculation methodology); a shortage of over 5,000 the staff are sometimes forced to compromise on simulation,

megavoltage machines. This inequity goes even further when dosimetry and frequent machine calibration in order to treat

comparing the availability of radiotherapy services across more patients. This is not of course a desirable situation, since

regions. For example, as can be seen in Figure 1, Europe has 17 in the first place it is not in line with safety standards and IAEA

million inhabitants, while Latin America and the Caribbean of ionizing radiation in medicine23,24, and secondly, it does not

per capita in North America . acquire recognition as an effective curative intervention, as it

The lack of availability in radiotherapy treatment does not is elsewhere. It might also discourage further investments in

stem from a lesser need in LMIC. In fact, the needs are higher these countries by donors due to fears of accidents or

than high-income countries, because due to an absence of malpractice.

effective prevention and early detection and screening To have a closer look at the reality in LMIC, it would be

services, as well as lack of adequate diagnostic and treatment useful to refer to a detailed map on “Global access to

facilities, a higher proportion of cancers in LMIC are detected radiotherapy” (Figure 2) provided by the IAEA PACT

at an advanced stage, leaving palliative radiotherapy (or use of Programme Office25 using IAEA´s DIRAC database26 and other

opioids) as one of the only options for treatment, even for available information.

cancers that, when detected in earlier stages, have curative The following considerations may help clarify the

treatment options . In this regard, the role of radiotherapy in significance of the numbers on the map:

the palliative care of cancer patients is particularly relevant for ‰ According to a study in Australia, supported by other work

LMIC (and probably will remain as important in the next in Sweden and Canada, for every 1,000 new cancer

decade or two according to many experts)17,18. The symptoms patients, 523 would need radiotherapy as part of their

most commonly relieved with palliative radiotherapy are pain, treatment (52%), out of which 120 patients (23%) would

bleeding and organ obstruction caused by tumours17. The cost require re-treatment12,27. The IAEA experience, however,

of a single fraction of palliative treatment may be less than suggests that in developing countries this figure is higher; at

US$5 in developing countries where staff costs are also low18. least 60%19. This rate will remain higher in the next decades

This compares very favourably to some of the chemotherapy until cancer prevention and early detection programmes, as

regimens, which can only be palliative for metastatic common well as other cancer services and public education

solid tumours . Palliative radiotherapy is a cost effective programmes are operational and effective in LMIC.

modality, but the extent provided depends on resources ‰ Based on acceptable international standards for a

available19. Currently, over 80% of megavoltage cobalt sustainable delivery of radiotherapy28, and several expert

machines available in many LMIC are providing nothing but reviews by the IAEA11, it is recommended that each

palliative treatment (which, incidentally, requires less radiotherapy machine should treat on average up to 500

throughput of the machine ). Although palliative radiotherapy shifts). Since some patients will require re-treatment, the

guidelines , it is reported that due to the overwhelming higher than the number of incident cases requiring

number of patients seeking treatment, and the severe radiotherapy.