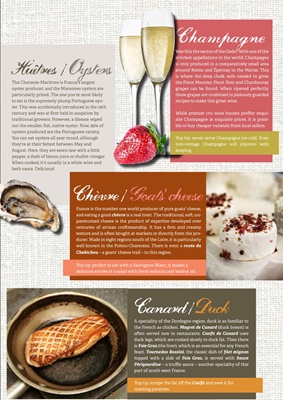 Canard / DuckA speciality of the Dordogne region, duck is as familiar to

the French as chicken. Magret de Canard (duck breast) is

duck legs, which are cooked slowly in duck fat. Then there

is Foie Gras (the liver), which is an essential for any French

topped with a slab of Foie Gras, is served with Sauce

Périgourdine - a truffle sauce - another speciality of this

Top tip: scrape the fat off the Confit and save it for

Was this the nectar of the Gods? With one of the

strictest appellations in the world, Champagne

is only produced in a comparatively small area

around Reims and Épernay in the Marne. This

is where the deep chalk soils needed to grow

grapes can be found. When ripened perfectly,

these grapes are combined in jealously guarded

recipes to make this great wine.

Champagne at exquisite prices, it is possible to

non-vintage Champagne will improve with

oyster producer, and the Marennes oysters are

particularly prized. The one you're most likely

to eat is the supremely plump Portuguese oyster.

This was accidentally introduced in the 19th

century and was at first held in suspicion by

traditional growers. However, a disease wiped

oysters produced are the Portuguese variety.

You can eat oysters all year round, although

they're at their fattest between May and

August. Here, they are eaten raw with a little

pepper, a dash of lemon juice or shallot vinegar.

When cooked, it's usually in a white wine and

France is the number one world producer of pure goats' cheese,

and eating a good chèvre is a real treat. The traditional, soft, unpasteurised

cheese is the product of expertise developed over

centuries of artisan craftsmanship. It has a firm and creamy

texture and is often bought at markets or directly from the producer.

Made in eight regions south of the Loire, it is particularly

well known in the Poitou-Charentes. There is even a route du

Chabichou - a goats' cheese trail - in this region.

Top tip: perfect to eat with a Sauvignon Blanc, it makes a

delicious entrée in a salad with fresh walnuts and walnut oil.