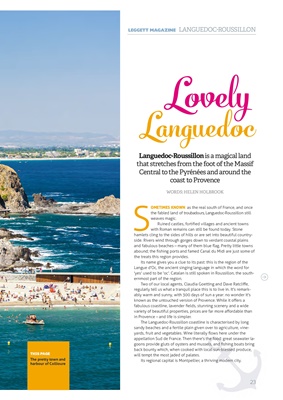 Languedoc-Roussillon is a magical land

that stretches from the foot of the Massif

Central to the Pyrénées and around the

OMETIMES KNOWN as the real south of France, and once

with Roman remains can still be found today. Stone

hamlets cling to the sides of hills or are set into beautiful countryside.

Rivers wind through gorges down to verdant coastal plains

and fabulous beaches - many of them blue flag. Pretty little towns

abound; the fishing ports and famed Canal du Midi are just some of

the treats this region provides.

Its name gives you a clue to its past: this is the region of the

Langue d'Oc, the ancient singing language in which the word for

'yes' used to be 'oc'. Catalan is still spoken in Roussillon, the southernmost part of

Two of our local agents, Claudia Goetting and Dave Ratcliffe,

regularly tell us what a tranquil place this is to live in. It's remarkably warm and sunny,

known as the untouched version of Provence. While it offers a

variety of beautiful properties, prices are far more affordable than

in Provence - and life is simpler.

The Languedoc-Roussillon coastline is characterised by long

sandy beaches and a fertile plain given over to agriculture, vineyards,

fruit and vegetables. Wine literally flows here under the

provide gluts of oysters and mussels, and fishing boats bring

back bounty which, when cooked with local sun-blessed produce,

will tempt the most jaded of palates.

Its regional capital is Montpellier, a thriving modern city.

The pretty town and